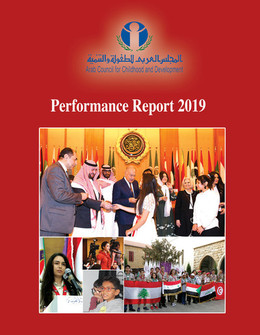 There is no doubt that there are decisive years in the march of institutions, so was the year 2019 in the march of the Arab Council for Childhood and Development ("ACCD"), as it was a decisive and crucial year at the institutional level, with HRH Prince Abdul Aziz Bin Talal Bin Abdul Aziz taking over the presidency of ACCD in March 2019, succeeding the late HRH Prince Talal Bin Abdul Aziz, ACCD Founder, whose legacy will remain immortal. Hence, this year has effectively and growingly embodied the continuation of the developmental march that has been initiated since more than three decades ago, as well as a fresh and vibrant new beginning with all the meanings of hope, optimism and aspiration to a better future for the Arab children.

This enthusiastic spirit was reflected in the work of ACCD, as the year 2019 has witnessed the launch of a new phase of ACCD philosophy and strategic approach, which relies on "the empowerment of Arab children in the era of the fourth industrial revolution", in light of a vision based on the concept that it is time for the Arab children to participate and catch up with the unlimited opportunities provided by this digital transformation and the new revolution with its implications on the cultural, educational, social and economic levels, as well as enabling our children to access this new world. This approach is integrated in cohesion with ACCD's Model for Upbringing "Education for Hope", which relies on the rights-based approach, developing capacity, empowerment and participation approach and raising awareness and developing personality approach, under the slogan of "New Mind for a New Human in a New Society".

Therefore, the year 2019, in light of the renewed strategic approach of ACCD, was marked by intellectual, scientific and professional momentum, as 2019 has witnessed launching the implementation of ACCD's projects on "The Empowerment of Arab Children in the Era of the Fourth Industrial Revolution" and "The Second Session of King Abdul Aziz Prize for Scientific Researches on Childhood and Development", as well as launching the Regional Study on Child Labour in the Arab Region in cooperation with the League of Arab States (LAS) and a number of other partners. In addition, ACCD has initiated the first steps for the project of "Utilizing Modern Technology in Early Detection and Intervention for the Inclusion of the Arab Children with Disabilities in Education and Society", along with starting the second phase of "I Have Chosen Hope" project, as well as completing the work in applying ACCD Model of Upbringing "Education for Hope" through implementing the components of the Media Observatory for Arab Child Rights, Early Childhood Development and Knowledge Development.

Realizing that children are the basic pillar of the work of ACCD, children were strongly participating in our work throughout the year, through holding the Second Arab Children Forum in Lebanon, and the Meeting on the Visions of Egyptian  Children towards Quality Education, in addition to holding focus groups discussions with children in Lebanon, UAE and Tunisia, to spot their viewpoints on what is presented in the Arab media when dealing with their issues, as well as holding a workshop with children on the impact of digital media on their culture.

Throughout the year 2019, we take the pride in ACCD's success in expanding and consolidating its network of partnerships internationally, regionally and nationally, as a number of protocols of cooperation was signed, in addition to implementing all the activities with ACCD's strategic partners and a new number of partners, which had a great impact on the course of work this year.

Despite everything that we sought to accomplish during the year 2019, yet the ambition, especially with this institutionally and intellectually crucial phase, is greater and deeper, as we are still looking towards more work and gaining partnerships for the benefit of the Arab children.

All our thankfulness and gratitude to HRH Prince Abdul Aziz Bin Talal Bin Abdul Aziz, ACCD President, and we promise His Highness to do more achievements. We also express our thanks and appreciation to the strategic partner, the Arab Gulf Programme for Development (AGFUND) and the members of the Board of Trustees, along with all the partners, experts, researchers and media professionals, who cooperated with us. We also express our thanks and appreciation to the staff of the General Secretariat of ACCD for their exerted efforts, perseverance and teamwork, which positively reflected on all that was accomplished, by thought and practice, in support of the mission and goals of ACCD.