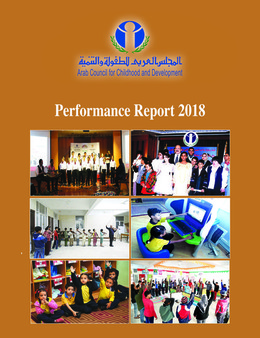 The end of the year 2018 witnessed the death of HRH Prince Talal Bin Abdul Aziz, the Founder and patron of the Arab Council for Childhood and Development (ACCD), the pioneer of philanthropy, development and enlightenment. The pioneer initiatives of the late Prince will remain distinctive and crucial landmarks in raising the status of the human and marginalized groups everywhere, at both the Arab and international levels.

Mourning its Founder, ACCD confirms that this developmental institution, which the late HRH Prince Talal has instilled and sponsored for over three decades to serve the Arab children, will continue its march at the supervision of HRH Prince Abdul Aziz Bin Talal Bin Abdul Aziz, who took over ACCD presidency, succeeding his father, the Founder, in March 2019.

On the other hand, the year 2018, the second year of ACCD's Strategic Plan (2017-2020) that focuses on developing and implementing a new guiding Model for Arab Child Upbringing under the slogan of the "Education for Hope", has witnessed several achievements and events, foremost of which was the Fifth Arab Civil Society Forum for Children. ACCD hold the Fifth Forum in partnership with the Arab Gulf Programme for Development (AGFUND) and the League of Arab States (LAS) in October 2018 under the slogan "Upbringing in a Changing World... New Mind for a New Human in a New Society", with the participation of more than 300 participants from 18 Arab countries. During the Fifth Forum ACCD has launched its Upbringing Model and held a Dialogue Session entitled "Landmarks of the Developmental March of the Late HRH Prince Talal Bin Abdul Aziz", to document His Highness's philanthropy and the intellectual and progressive vision through his developmental institutions, where several public figures, intellectuals and media professionals have participated with speeches.

Moreover, ACCD has continued to implement its strategic projects, such as the Project of "Upgrading Early Childhood Development Centre in the Educational City, and Improving School Readiness", as well as the Media Observatory for Arab Child Rights and the Project of "The Inclusion of Arab Children with Disabilities in Education and Society". In addition to concluding the first phase of the Project of "The Rehabilitation and Inclusion of Children in Street Situations: I Have Chosen Hope", as well as continuing work on King Abdul Aziz Prize for Scientific Researches on Childhood and Development in the Arab Countries.

While beginning a new phase under the wise leadership of HRH Prince Abdul Aziz Bin Talal Bin Abdul Aziz, ACCD is looking to continue its march towards developing and caring for the rights of the Arab child, with the support and cooperation of all active partners, foremost of whom is the AGFUND.