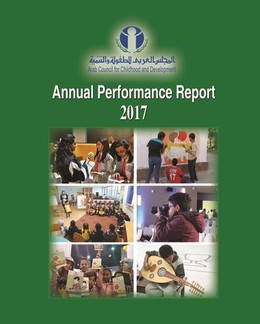 Before presenting its performance during the year 2017, the Arab Council for Childhood & Development (ACCD) extends its sincere thanks and gratitude to HRH Prince Talal Bin Abdul Aziz, ACCD President, for his continued support for ACCD's march that started since more than 30 years. ACCD also extends thanks and appreciation to all supporters and partners of its work, most notably the Arab Gulf Programme for Development (AGFUND) and the League of Arab States (LAS), as well as all those who cooperated with ACCD in its continued mission of protecting the rights of the Arab child.

The year 2017 witnessed an intensive work to implement ACCD Strategic Plan (2017 - 2020) that is based on replicating ACCD's Model for Upbringing Arab Children under the slogan "Education for Hope". ACCD has sought to mobilize all energies to implement this Model with its philosophical dimensions through projects based on building hope, the ability to change and teaching the values of global pedagogy, aiming at building knowledge society and developing the values and life skills of the 21st century, through effective partnership with institutions working in the field of childhood and according to the sustainable development goals (SDGs).

In 2017, ACCD has already begun to implement the Project of "Innovating Early Childhood Development Center at the Educational City and Improving School Readiness" in partnership with the Egyptian Ministry of Education, AGFUND and a number of partners. In addition, ACCD has continued to implement the components of the Model, such as the Project of "Rehabilitation and Inclusion of Children in Street Situation: I Have Chosen Hope", the Project of the Inclusion of Children with Disabilities in Education and Society and the Project of Media Observatory for Arab Child Rights that succeeded (during 2017 with its supporting partners) in adopting one of its components (the Professional Guidelines for Arab Media Addressing the Issues of Child Rights) by the Council of Arab Ministers of Media.

The year 2017 has been also marked by launching King Abdul Aziz Prize for Scientific Researches on Childhood and Development in the Arab Countries. The first session of the Prize tackles the issue of "Citizenship Education and Socialization". The Prize is considered to be a serious scientific step, which was preceded by organizing a number of intellectual meetings and issuing publications, aiming at enriching scientific research and mobilizing social dialogue on the critical issues related to children and their upbringing.

There is no doubt that the year 2017 witnessed an effective momentum in expanding and consolidating partnerships between ACCD and other partners at various levels, for example, a number of protocols of cooperation were signed, along with implementing events and activities in collaboration with partners who believed with ACCD in the importance of working on the issue of empowering children and expanding their opportunities in knowledge society and achieving positive citizenship.