The Sessions of Arab Childhood Committee 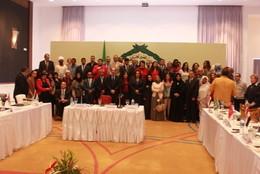 ACCD has participated in the meetings of the 21st Session of the Arab Childhood Committee, the 13th Meeting of the Follow-up Committee on the Elimination of Violence against Children and the 14th Meeting of the Advisory Committee on Child Rights, organized by the League of Arab States (LAS), in cooperation with the National Council for Childhood and Motherhood during the period 18-20 January 2016 in Sharm El-Sheikh, Egypt. The meetings have been attended by representatives of the national ministries and mechanisms concerned with children's issues in Arab countries, as well as representatives of relevant international, regional and national organizations.

During the meetings, ACCD has presented a number of joint projects with LAS; e.g. the Media Observatory for Arab Child Rights, the 5th Forum of Arab Civil Society for Children, the Arab Children's Forum and ACCD's initiative of the Rehabilitation and Inclusion of Children in Street Situations through Education for Hope, under the slogan "I Have Chosen Hope" and the Inclusion of Arab Children with Disabilities in Education and Society.

Participants recommend the adoption of the Professional Guidelines of "Child Friendly Media" and replicating the Project of "I Have Chosen Hope" at the Arab level.